All Saints Church, Nunney holds services at 9.30 am on the 3rd Sunday of every month (Holy Communion at 9.30 am) and every Friday morning at 10 am (Holy Communion – BCP). Additional services are held on special days to celebrate Easter, Christmas, Mothering Sunday, Harvest and on Remembrance Sunday for example.

All Saints Church lies at the heart of the busy, picturesque village of Nunney, overlooking Nunney Castle. The church has been the focus of Christian worship for over 800 years. Its tranquil interior is brightly lit by four dormer windows in the barrel-vaulted ceiling – restored by the Friends of Nunney Church in 2017.

The church hosts a variety of formal and informal worship services, weddings and funerals, concerts, plays and exhibitions throughout the year. With its proximity to Nunney Castle it is popular with tourists as well as residents, and is open every day . All are welcome to sit quietly, pray and soak up the atmosphere. On summer Sunday afternoons, teas are available and there is a popular secondhand book stall.

Members of the church and community are involved in all aspects of the life of the church including leading music, prayers and children’s groups during services, serving teas, cleaning and decorating the church, and caring for the churchyard.

Nunney church has recently signed up to the eco-Church scheme and we are working towards our Bronze award. The churchyard is a calm spot to sit and enjoy the wildlife and views of the castle and countryside. The churchyard is closed for burials but interment of ashes is permitted if there is a village connection . The lesser horseshoe bats were rehoused in a purpose-built bat sanctuary above the vestry in 2016.

We are currently raising funds to install an accessible toilet in the church so that we can welcome even more visitors to events in the church.

The Postlebury bellringers are working towards the installation of an extra two bells (making eight) in the Nunney tower, to commemorate the 100th anniversary of the ending of the First World War. The installation should be completed early in 2022. 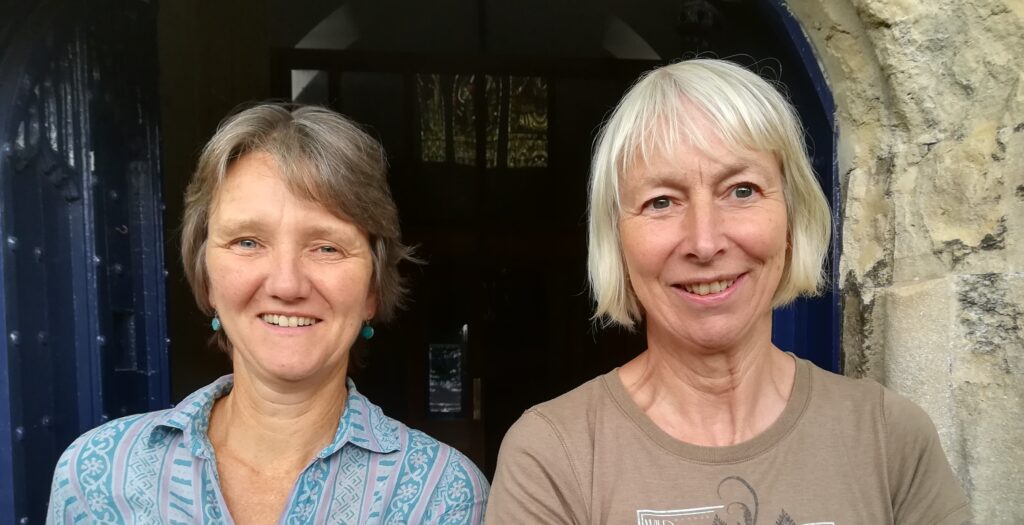 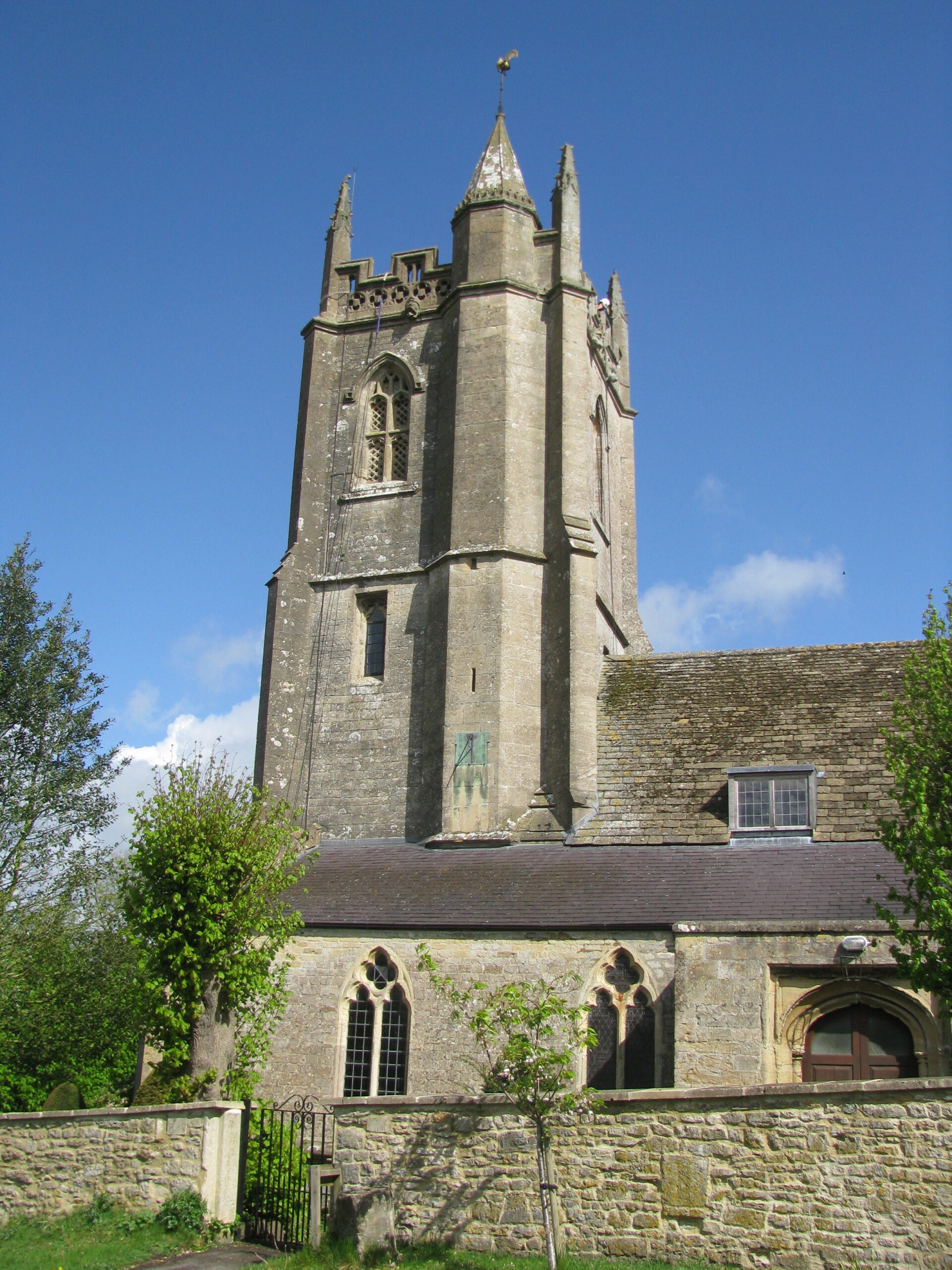 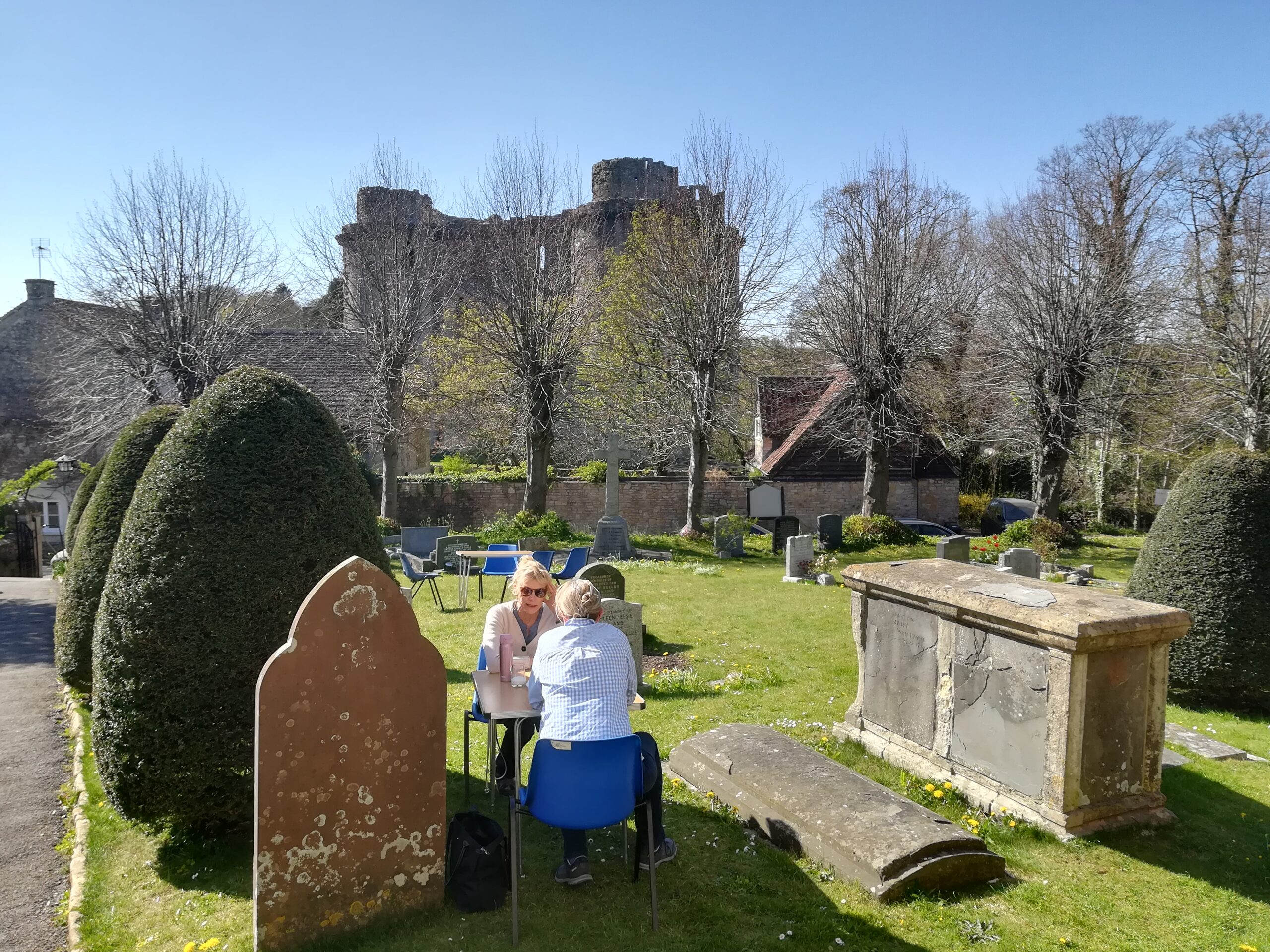 It is possible that the church has its origins in the Saxon period, but nothing from that age survives, save a fragment from a Saxon preaching cross dug up in 1901 and stolen from the church in 2002.  The church was certainly amended in Norman times but retains only the font from this period and the church was rebuilt by the De Montfort family in the 13th century.  The style of the chancel windows, and also those of the aisles (assuming that they are faithful C19 copies) reflect this period.  The stained glass is Victorian.

The De la Mare family extended the church in the 14th century:   the aisles were said to have been added – or possibly reconstructed – around 1375-1380.  The arcades and tower arch may be of this period.

The church received considerable attention in the 19th Century, beginning with the extension of the aisles themselves in 1820 at the West End and the relocation of the major monuments into the St Katherine Chapel to improve the seating capacity of the nave.   The sacristy was added in 1853. The wood screen is an early 15th century example which has been moved and mended several times in its life.   The cornice with its angels, vine leaves and crests is particularly fine.

The tower was erected in the early 1500s and is of characteristic Somerset type.  The spirelet tops a semi-octagonal staircase and there is a richly decorated and moulded parapet on top, gargoyles on the sides and a gilded cock weathervane installed in 1774. The panel below the clock face represents the badge of the Paulet family, Lords of the Manor in the 15th and 16th centuries.  The clock has an early 18th century blacksmith forged frame and a wrought iron birdcage movement.

The font is Norman and is circular, with spiral fluting; cover in Jacobean style, conical, in wood, dated 1684 and bearing the initials W.S.

The wall painting of St George on the north clerestory wall, with symbols possibly related to Richard II, suggesting a date in the last quarter of the 14th century.  This was uncovered when Benefactor boards (now in the meeting room) were taken down in 1895.  Above the font is an area where fragments of wall painting were uncovered during the roof renovation work in 2016.  The painting probably dates from the late 15th century.

The effigies in the north transept (St Katherine Chapel) consist of a figure of a recumbent knight – possibly a member of the De la Mare family, of 14th century date.  In front, two monuments;  one featuring a recumbent knight and his lady – probably Sir John Paulet (died 1437) and his wife Constance set on a tomb chest; the second a recumbent couple of the Elizabethan period, probably Richard Prater who bought Nunney Castle in 1577, also set on a tomb chest having Ionic pilasters and shields in cartouches.

The brass eagle lectern was possibly cast by Singers of Frome in 1921.  The pulpit was made by Henry Spencer of Frome in 1742 and was originally a three-decker.

The coat of arms over the door to the South Porch is that of King Charles II and commemorates the restoration of the monarchy in 1660.

The church fell into disrepair between the two world wars and could not be used for services for many years in the 1940s.   Services were held in the nearby Church Rooms instead.   The roof was repaired after  the war but the barrel-vaulted ceiling was only reinstated in 2017, thanks to a significant fund-raising effort in the village.

The church is at the heart of the village of Nunney and welcomes many visitors throughout the year.   It is open daily from 9 am until 6 pm or dusk if earlier. 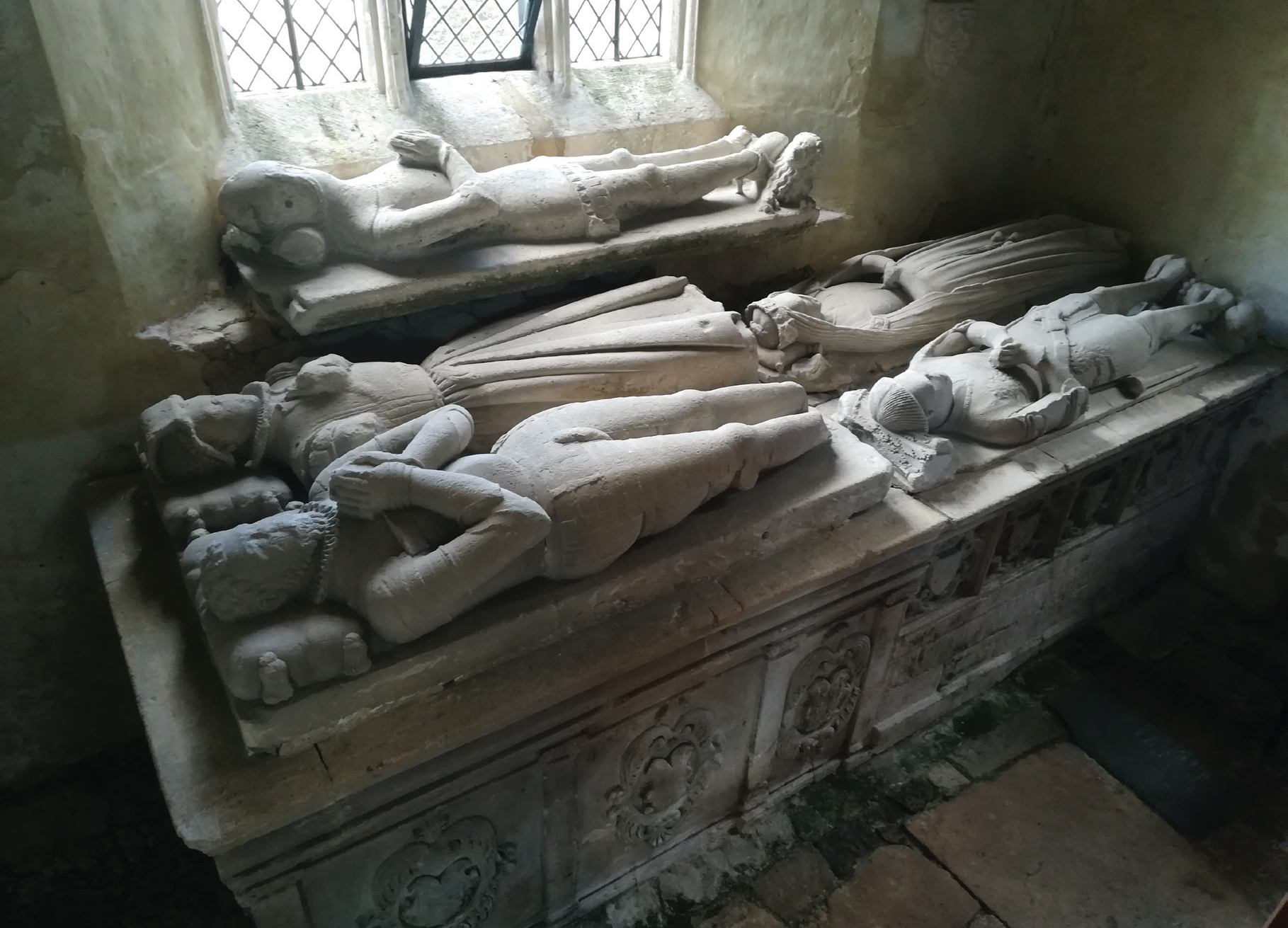 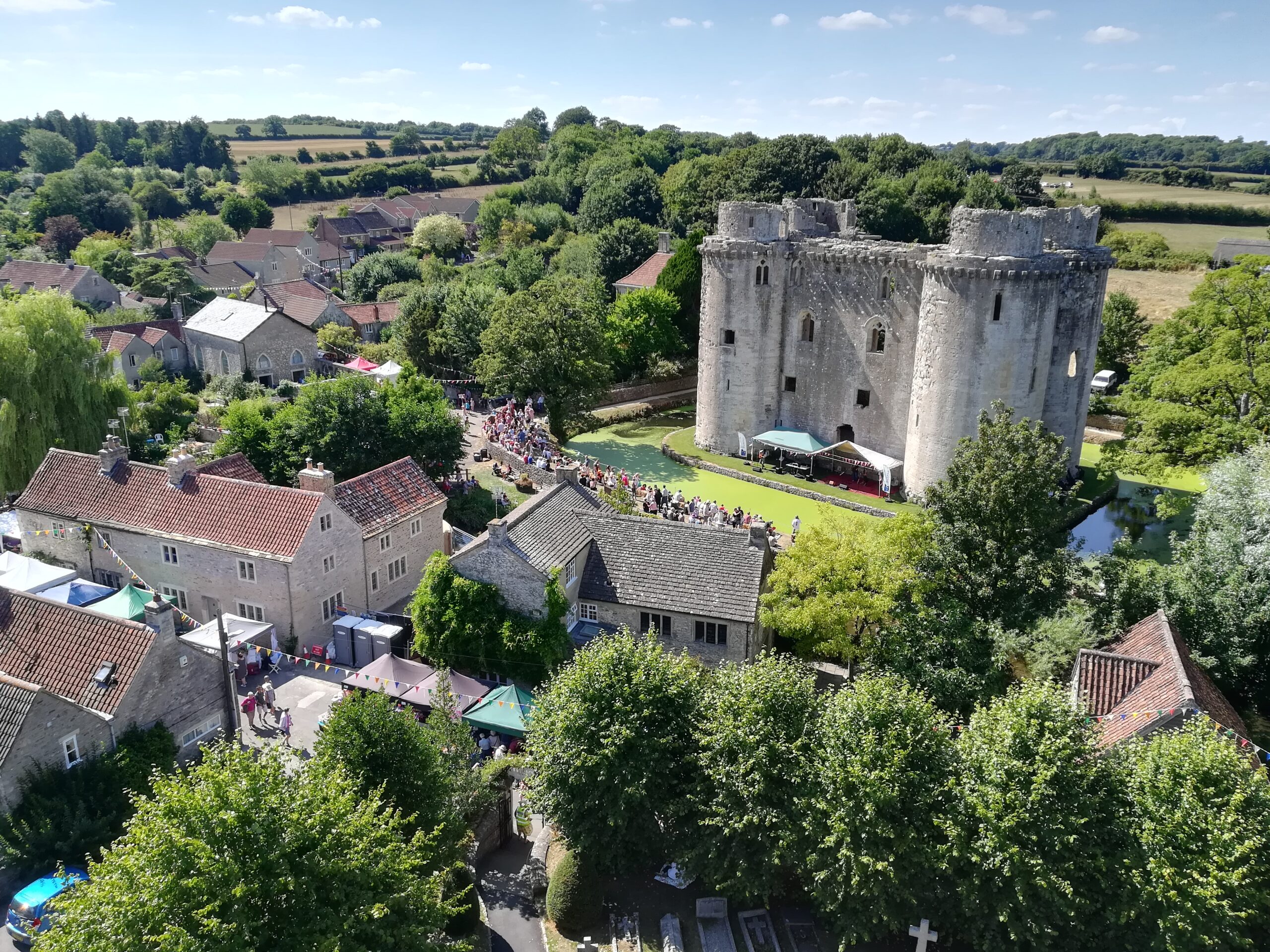